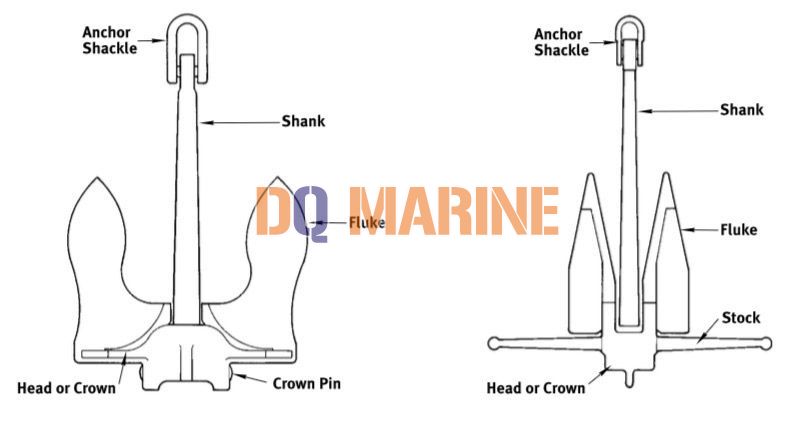 Optimum design of an anchor is influenced by the spe- cific composition of the ocean floor. Basically, we catego- rize the ocean bottoms into three groups:

1. Mud, or silt, which varies the most in consistency and offers little resistance to forces.
2. Sand, ideally the most consistent, and where anchors specifically designed reach excellent holding efficiency.
3. Rock,orMarl,poorholdinggroundwherean anchor’s dead weight is it’s only asset.
The efficiency of an anchor in a given test is expressed in terms of “Holding Power” per pound of its own weight, not in “Proof test” which indicates physical properties of the material.
The fluke angle of an anchor has a definite effect upon the “Holding Power”. The flukes should enter the bot- tom at an angle that will allow the crown, or head, to pen- etrate to a depth which can produce maximum efficiency: Additionally, we have determined the following:
1. The angle of fluke penetration in mud bottoms should approximate 50°.
2. In sand the penetration angle should be in the area of 30°.
3. For anchoring in various bottoms a compromise approximating 43 ° is desirable.
Other considerations in selecting an anchor should in- clude:
1. Convenience for handling and stowing.
2. Aptitude for taking hold.

4. Freedom from fouling, which all anchors do, but some in lesser degrees.
5. Influence developed by the chain’s catenary which absorbs shock loads and lowers the angle of pull at the anchor by its weight.
The anchor is the key to effective anchoring or mooring. It is essential to know what to expect from various anchors. The resistance of an anchor to being dragged through a soil has been considered as occurring in two stages: first, biting into the bottom due to the ploughing effect of the flukes, and secondly, maintaining a continuous resistance to drag after it is planted into the bottom.
Holding power is directly proportional to projected fluke area, and shear strength of the bottom material, and in- versely proportional to penetration-area resistance. In many cases a smaller anchor with favorable fluke area to weight ratio is more dependable than a heavier anchor. Holding Power for the two most widely used anchors are as follows:
1. Stockless Type anchors, in sand, develop a holding power to weight ratio of seven to one. In mud they develop three to one. The angle of penetration in both cases is 45°.
2. Lightweight Type anchors, in sand, develop a holding power to weight ratio of twenty to one, with the angle of penetration being 30°. In mud they develop nine to one with the angle of penetration being 50°.
The depth of penetration in all preceding cases is com- piled from three to seven feet in sand, and from seven- teen to twenty feet in mud. All calculations incorporate a 0° scope angle.